Stay informed about Futron, our partners, technology, events, trends, and all the news that is important to you. 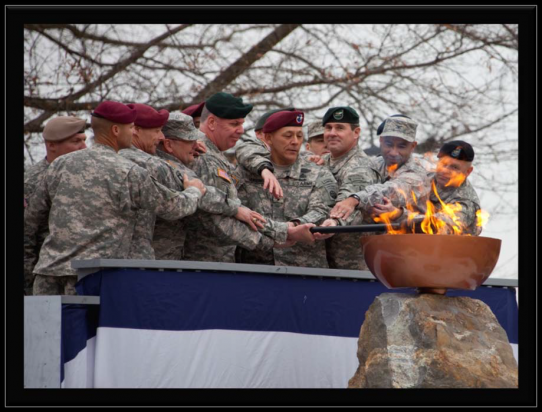 Futron Incorporated’s Design-Build Construction Division completed construction of “The Eternal Flame” at Ft. Bragg, NC. This project was done in close coordination with Dept of Public Works and the 82nd Airborne. The project was successfully fast-tracked to meet the memorial ceremony deadline.

Lt. Gen. Frank Helmick, commander, XVIII Airborne Corps and Fort Bragg said the flame commemorates that sacrifice, honoring those killed in the Sept. 11 attacks and the 5,500 service members who have died while fighting the wars in Iraq and Afghanistan.

The new monument, placed between two towering oaks on the base’s main parade field, consists of a rough-cut column of stone on a granite base. Perched on the point of the stone is a cauldron in which a gas-fed fire burns.

The stone came from Curahee Mountain in Georgia, the site of Camp Toccoa, a World War II-era paratrooper training ground. The fire bowl is cast from steel salvaged from the wreckage of the World Trade Center after the terrorist attacks on the buildings on Sept. 11, 2001

Futron Incorporated was honored to be able to provide the US Military service members and families with this memorial and is proud to continue to serve our country.